I've published a sequel to Monkey Hunt! Long overdue and started many moons ago, it chronicles a few weeks in the year after Monkey Hunt concludes.

The aftermath of her battle with the Djinn leaves her at a dissolute loose end. But just when she's sinking into darker waters, Lee Birch is offered a job that appeals to her sense of adventure and civic duty. There is a catch! She has to complete her Queensland Police Service training before she can officially start work on the Major Crimes Unit.

But that won't stop her getting some on the job training with Harriet Blackmon when human remains show up in a fisherman's crab pot in the Brisbane River. She's soon in the thick of it, trying to track down the killer. Soon there are two forces who want her dead and both are using dark magic to take her out. She is forced to rely on her dark rider to keep her from dying as the attacks intensify.

Have a look at Death Rider. I think it will keep you entertained. 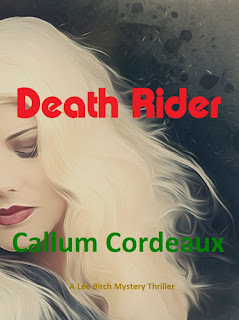 You can find it on Amazon Kindle, Apple, Barnes & Noble, Tolino, Scribd, Kobo, Baker & Taylor, Bibliotheca and 24 Symbols.
Posted by Callum Cordeaux at 19:00 No comments: